Reorganisation and Co.. Changes – Now what?

The significance of reorganisation and an example of a support format
Alongside personality and family, work has existential significance. Massive turning points and disruptions in the workplace can sometimes lead to damage to a person’s satisfaction and fundamental motivation which is very difficult to repair. They can cause long-lasting destruction to enthusiasm for the job or the profession.
Fusion and reorganisation as major disruption
Fusions and reorganisations are major disruption, from which employees often find it difficult to recover, if they manage it at all. The reason for this is that the employees’ identity has not completely followed the changed reality of the organisation.
Consequences and symptoms of poor change management
The difference between the “old” and “new” identity leads to the employees mentally resigning and being demotivated for a lasting period of time. They suspect enemies among the new employees, constantly feel disadvantaged and pass this feeling on to colleagues. These employees compare the situation they chose themselves at some point with the current situation and prove every day that the change was a bad decision. It doesn’t matter that the greatest damage is coming from themselves.
An example of “changing identity” from a different world:
You buy a house in a quiet area. Even the neighbours are very quiet and you are happy. The contract says nothing about a “quiet” house, but in your head, that’s what you’ve bought! You now get new neighbours who are very loud. Suddenly your house isn’t the one you were used to any more. You could sell up and move. You could listen out for every noise, get annoyed about everything and create your own hell on earth. Or: You “say goodbye” to the old house and decide to live in the new house with the new neighbours.
This change in identity is at the heart of the matter!
The more you believe you have a right to the quiet house, the more difficult it will become to choose a good alternative.
Alongside the loss of the old “identity”, a further stress factor arises:
no longer knowing who makes the decisions, and how.
This double distress comes from a lack of information about what is fixed and what is still open for discussion.
Do I have to do something? How do I have to do it? What are the rules of this change? How do I prevent myself from losing out so that I have to reproach myself later? Who do I have to influence?
Rumours, assumptions and fears are highly contagious – it needs just a few people to start it off.
Support during change processes
In order to help staff adapt to changed conditions and to prevent demotivation and “mental resignation”, here is an example of a format for supporting change processes professionally:
The three-step process for this change format is:
1. Transparency, 2. Letting go, 3. Openness to new things
You should provide as stable a psycho-social framework for the change as possible, using
1. security and cognitive control and open communication of the decision-making processes which have taken place and which are planned,
2. cognitive and emotional acceptance of the change through “letting go” of the old working situation and
3. openness for new things, conflict prevention and a shared starting point.
In this, the content of the decisions is of lesser importance. 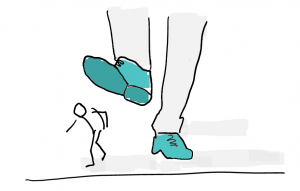